skip to main | skip to sidebar

Scuppernong Jelly (without a water bath canner, even!) 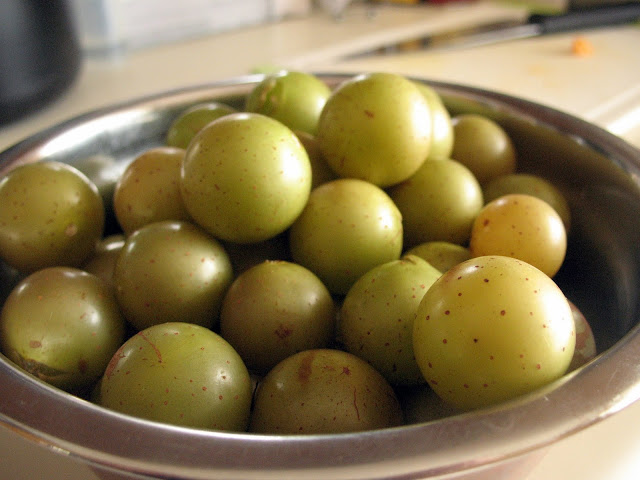 Since most of the people reading this are of the Yankee variety, I suppose I ought to first tell you all what a scuppernong is. It's an awesome name for a green muscadine grape, which are the sort grown most often down hereabouts. Noah and I saw some at the farmer's market on Saturday and I was compelled to get them, since I'd never heard the word or tried the fruit before. Turns out they're not really much good for plain eating. They taste pretty good (VERY strong), but the skin is unchewably thick and they're full of seeds, so it's quite a lot of effort for not much fruit. So in the interest of not losing our $3 investment, I decided to turn them into jelly Sunday morning. And lo, I did. 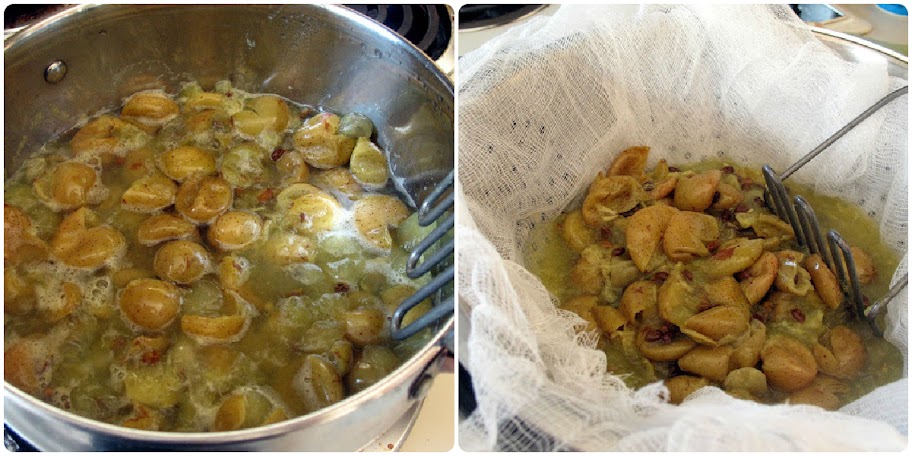 Despite the plethora of online recipes, I foolishly decided to just wing it. I started by mashing and boiling them with a little water for a couple minutes, at which point they looked terrible and smelled worse, and then drained them into a bowl, which yielded much less juice than I was hoping for. 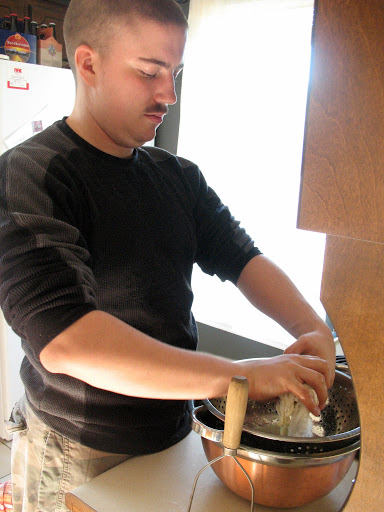 Noah helped by wringing them out once they cooled enough to not scald the flesh from his bones. 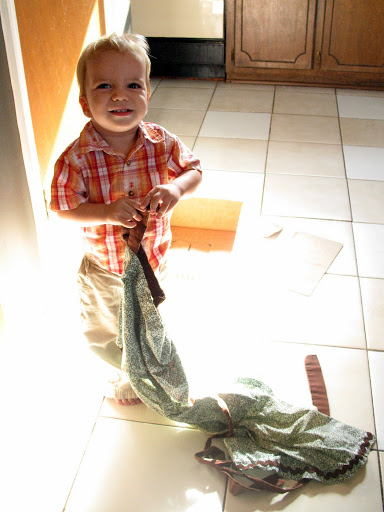 Jim helped by fetching my apron with a perplexed look on his face. 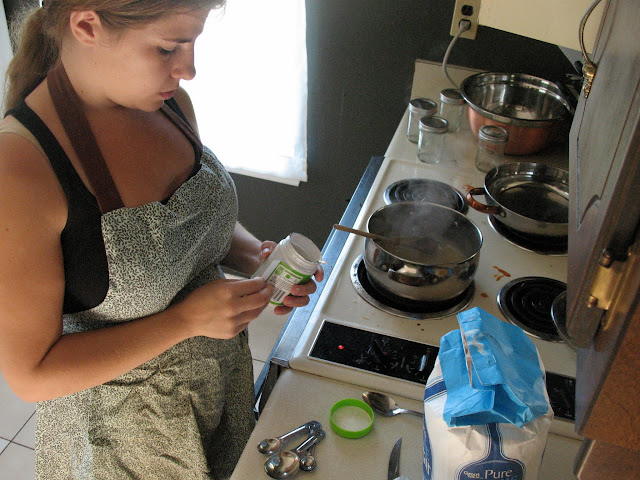 I helped by making a haphazard guess as to how much pectin to add.

I wound up adding about 3 cups of sugar and 1.5 tablespoons of low-sugar pectin (for about 2 pounds of fruit originally, which yielded around 2.5 cups of juice). That turned out to be too much pectin, I think, because the resulting jelly is VERY thick (but nonetheless tasty). Next time I'd add maybe 1 tablespoon of pectin, and possibly a bit less sugar, too, although I think that part is a matter of taste. 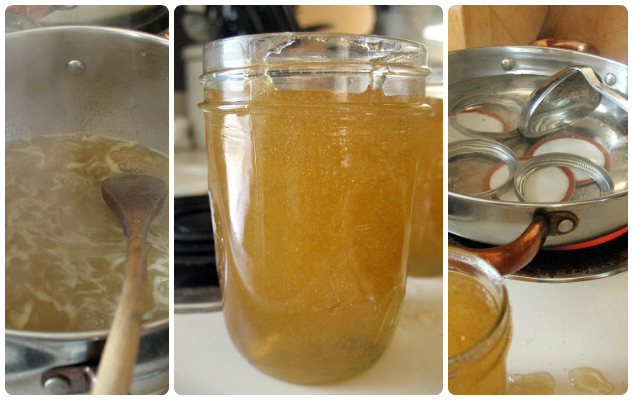 So then I boiled the bejeezus out of the juice/pectin/sugar mix for a couple minutes and then poured it into the preheated jars. At that point I decided to try to can them with a good old-fashioned heat seal, since I don't have a canner, so I boiled the lids too before I put them on. Apparently the only really important thing is that all the different parts (jelly, jar, lid) be hot and clean before you put them together, and then ideally the heat will seal it all up. It seemed to work for me - the buttons on the lids all popped down liked they're supposed to. We might all die of botulism in a few months, who knows, but for now I'm going to claim success. 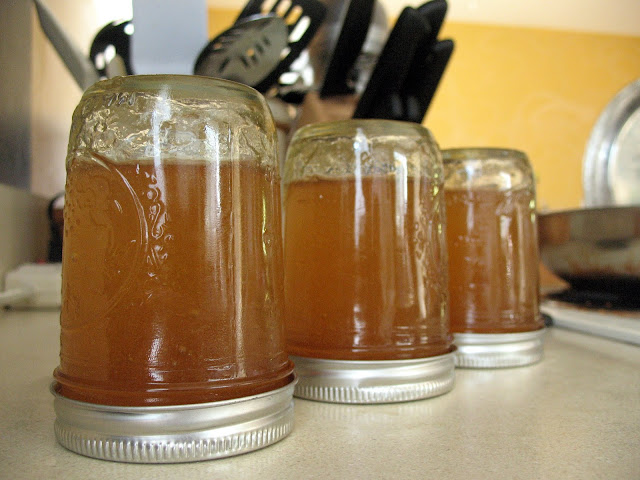 Jelly jars cooling down upside-down on the counter to facilitate sealing. 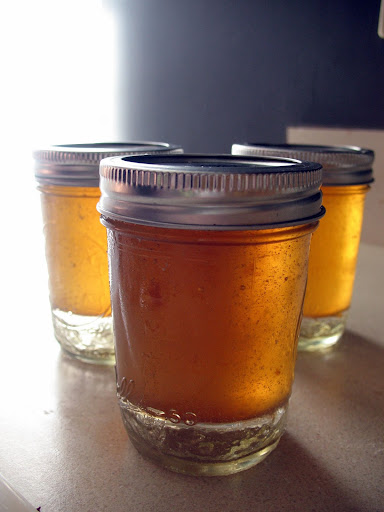 At that point we turned our attention to different matters. Noah, bless his frugal heart, was unable to stomach the idea of all those poor grape skins going to waste, so he decided to remedy the situation by making some prison wine. He stuffed the skins and juice-soaked cheesecloth into an empty jug, then filled the rest with water and a bit of sugar and yeast. The idea is that it'll ferment into something that will not taste awful, but I'm personally not going to try it until Noah proves that it won't burn its way out of my innards. 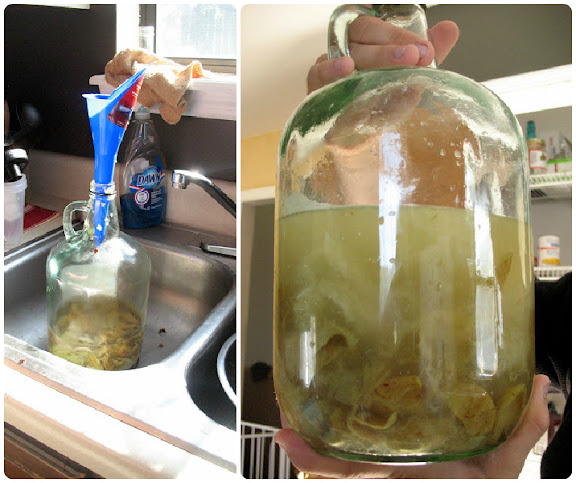 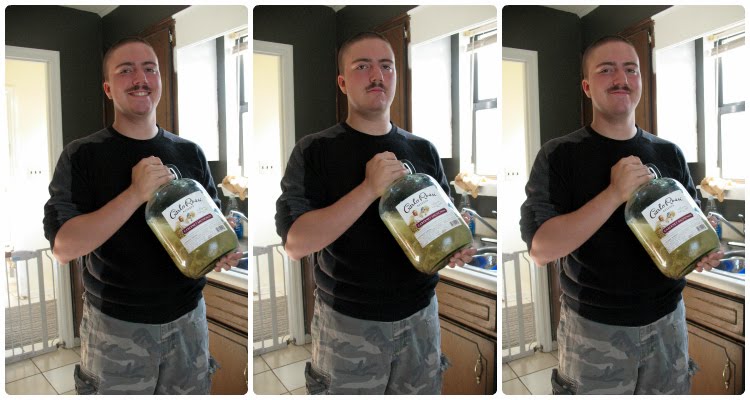 Noah poses proudly with his hooch. This is his entire repertoire of facial expressions.

The waste problem taken care of, I turned my attention to more important matters. Namely, I had jelly cooling and no bread. So, obviously, I made some bread. And naturally I made twice as much dough as I needed, so what was I to do but make cinnamon buns? Terrible situation, folks, just terrible. 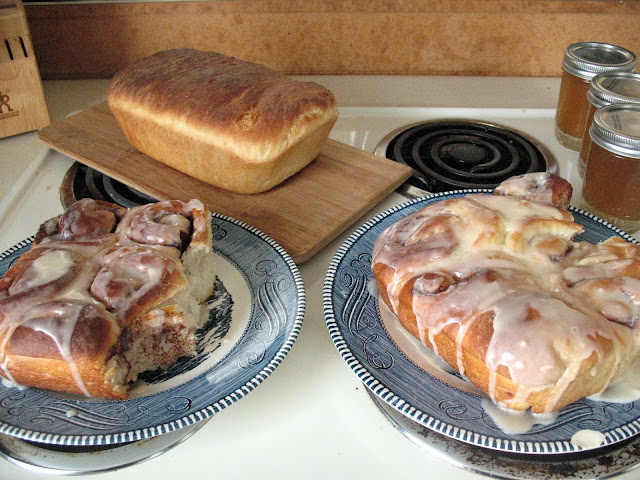 You really don't want to know how little of this was left over the next morning. 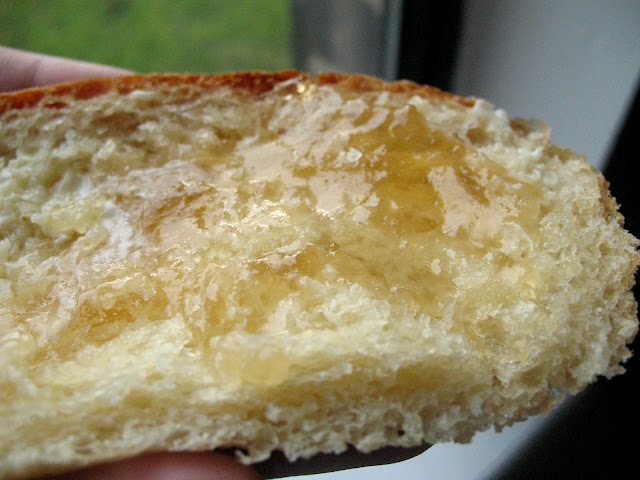 There is nothing (no exaggeration - NOTHING) better than fresh hot bread with butter and jelly.

And how did it taste? Amazing, seriously. It was kind of weird having that super-intense grape taste in an extremely non-purple jelly, but it was REALLY good (even if it did turn out so thick it was hard to spread). Even Jim gave it his blessing, but given the amount of dirt and sticks the kid eats, I'm not sure I should take that as an endorsement. 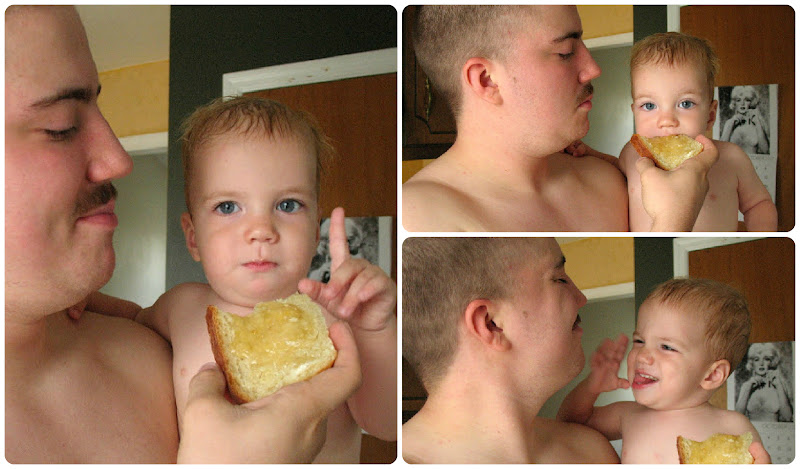 Oh my how I wish I was a guest in your home. Homemade jam and bread...heaven. Thank you kindly for stopping by my blog, Leah. Have a great weekend.

Looks good. I have canned in just a large pot before. Should I keep my eyes open for a canner at the auction? The cinnamon buns look really enticing. Cooler weather sure makes it nicer for baking and such doesn't it? Thanks for taking such good care of my son.

Rose, we can also thank Noah for being such a good hubby to Leah and Father to Jim. That man is priceless. Leah, I am so proud of your domestic efforts; you are ever so much more adventurous and energetic in your culinary pursuits than I ever was. Kudos, child. Now, get busy and make me some sticky buns...

Brandi - Haha, I wish you were here to share it too! Eating all of it ourselves was fun at the time, but boy did I semi-regret it the next day...

Rose - We thought about using pot of water, but didn't have any of those rubber tong thingies anyway, so just tried this way. If you ever spot a canner, we'd definitely love to have it! And yeah, this cool weather is making me want to bake allllll day.

Mom - I'll make all the sticky buns we can eat over Thanksgiving! :) And Noah IS pretty awesome, even if his prison wine is fairly icky-looking.

I think I know what you can make us all for Christmas! Have fun trying to fit it into moving this month. Oh well, there's always next year. I'll look for a canner. I'm so happy you do this blog. Thanks.

It’s actually a great and helpful piece of

info. I am glad that you just shared this helpful

information with us. Please stay us up to date like this.
Thanks for sharing.
Also see my webpage: www.thespainforum.com